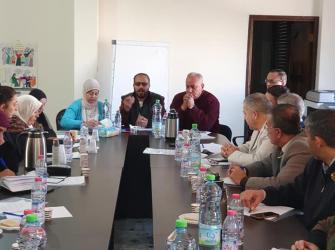 The Union of Cooperative Societies for Savings and Credit (UCASC) L.L in Palestine held a general assembly meeting on Monday December 23rd, 2020 in the presence H.E Al Wakeel Yousef Al Turk, the head of  Cooperative Work Authority, and his colleagues from the Cooperative Work Authority, Kamal Al shafei’, Bashar Sawafta, Jamal Abu Latifa and Sameeh Issa. The meeting was attended by 25 members representing 11 Savings and Credits Associations, the union’s members. The meeting included the approval of the balance sheet for 2018, and the administrative report. During the meeting elections for a new board and the number of board members was increased from five to seven. The following are the new board members:

Three members were elected to the Oversight Committee, the following are their names:

UCASC representing all the associations under its name, extends its sincere thanks and full appreciation to the former board of directors, for its important role, full commitment, continuous giving and hard work to by overcome all difficulties facing the Union during previous periods whether during their presence as members of the board of directors or as members of the associations.

We would also like to congratulate the newly elected members, and wish them all success, leading the Union during the coming  difficult times that Palestinian People are going through.