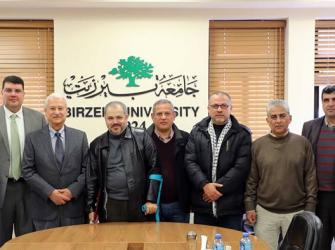 Cooperative Association of Governmental Staff for Savings and Credits signed a partnership agreement with Birzeit University to finance students’ premiums at Birzeit University in the Bachelor, Diploma and higher education programs through the Student’s Fund.

Mr. Osama Abu Karsh emphasized the importance of this agreement for supporting the educational process, through partnerships with all universities, Birzeit was the first to sign with.

Mr Abu Karsh added that this agreement will expand to include all universities after it proved its efficiency in supporting the educational process, after giving an overview about the association, whose notion is based on financing, management, and self-monitoring of its members in a way that meets their common needs, based on the well-known principles, values, and cooperative ethics.

He also spoke about the importance of the cooperative work, and being involved in it, because of its positive social and economic impact on the people involved, and its important role in integrating the cooperative principles amongst government employees.

Furthermore, Dr. Abu Hijleh has conveyed the university’s interest in supporting students, and their willingness to partner with institutions to facilitate a sustainable continuation of students’ education, especially throughout the difficult economic situation that the Palestinian community is going through.

Dr. Abu Hijleh also expressed how delighted the University to sign this agreement which will serve many students. He added that: “The beneficiaries of this agreement are students enrolled in the bachelor’s, diploma and postgraduate programs at Birzeit University, the cooperation is supporting their university premiums for their full study after their formal acceptance.

Dr. Mohammad Al Ahmad, the Dean of Student Affairs emphasized the university’s keenness to provide the best means to help students mitigate their payments, and support the cooperative sector represented by the Staff Association.

The Chairman of Student’s Fund Committee, Mr. Nizar Basalat, stressed on the importance of this agreement as it supports the education process and help students’ families, especially in the economic conditions in general. He added that the association seeks to expand to all local universities so that members can benefit from this fund as much as possible. He also stressed on the importance of cooperative work and the role the association in developing new mechanisms to serve those involved in it.

Finally, It is worth noting that Nizar Basalat, Kholoud Rashid, Sobhi Yousef and Adnan Thoqan are the members of the Student’s Fund at Birzeit University.